The Paths of Righteousness Lead to Many Worlds

If the name James Reasoner doesn't come to mind when you think of contemporary science fiction authors, there's a reason for that.  Science fiction isn't what he mainly writes.  James Reasoner is a noted western and crime writer.  If you like either of those genres and haven't read him, you should check him out.

Science fiction has always been one of my favorite genres, in fact the only one I read for a while when I was a kid.  So when I read about this collection on James' blog, I quickly snagged myself a copy.  Good thing I did, too.  James Reasoner is a practitioner of the art form created when Urg first painted his version of the mammoth hunt on the cave wall; he's a storyteller.

There are only five pieces in this book, which is something of a downer because I wasn't ready for the book to end.  Reasoner has a unique voice, and it comes through in the phrases his narrators choose and the way they describe things.  You can also see the influence of the western writer side of Reasoner's mind in some of the selections.  "The Path of Righteousness" and  "The Border Shift" have strong western overtones, especially the latter.  "Bugeyes" deals with human-alien relations.  "Terran Girls Make Wonderful Wives" is a noir PI story set on the Moon.  The final selection, "Season of Storms" is set in a near future Texas in which the weather has gone wild.

The characters are likeable, and they have depth.  The plots are straight forward science fiction adventures with heart.  The first and last tales are set in Texas, and being (as far as I know) a life-long Texan, Reasoner captures the tone and voice many non-Texan writers miss when they attempt to set their stories in the Lone Star State.

The stories are serious, meaning they aren't intended to be humorous or funny, but none of them have the dark, almost nihilistic tone that so much contemporary science fiction does, especially near future science fiction.  They reminded me of the science fiction I grew up reading, the old fashioned kind where the author told a story, told it well, and didn't try to beat me over the head with how clever he was with words or raise my social consciousness.  In other words, I was entertained, which is the primary purpose of good fiction.

In his blog post announcing this collection, Reasoner mentioned that putting the book together had made him want to write more science fiction.  I think that's a swell idea.  So, James, do you see that chair over there?  Yes, that one next to the (choose all that apply:  computer/typewriter/quill and parchment/clay tablet).  Please sit down and get to work.  Now.

Bill Crider posted the following photo on his blog earlier this year, and Scott Cupp passed it along to me.  I've been looking for an excuse to do something with it either here or at Adventures Fantastic..  It's from 2001, although I don't know the venue.  The writers pictured are Scott Cupp, James Reasoner, Bill Crider, and Joe Lansdale.  A swell bunch of guys. 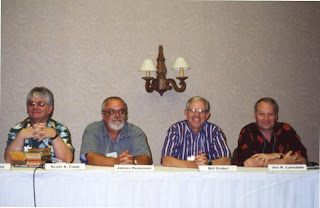 Posted by Adventuresfantastic at 7:47 PM