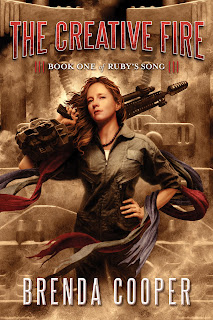 Every now and then events conspire to keep you from accomplishing simple tasks, such as reading a book.  This one took me exactly a month.  Normally, I could finish a book like this in days.  But it's been one of those months.  Days have gone by when I haven't been able to get any reading done, and much of it was due to pesky little stuff that had to be dealt with so it would go away.

It wasn't because I didn't enjoy the book.  I did.  Revolutions on generation ships are a staple going back to Heinlein's Orphans of the Sky.  It's a narrow subgenre, but one I enjoy.

The basic set up is this:  The Creative Fire is a generation ship that is heading home to the planet Adiamo.  The crew has grown into a caste society in which the castes are delineated by color of uniform.  Ruby Martin is a grey, one of the workers on the lowest levels of the ship.  One of the disenfranchised.  She and her friends Onor and Marcelle are about to graduate from school and become adults.

Ruby is in a garden when the sky literally opens and a man falls down from an upper level.  The Creative Fire is beginning to show the strain of centuries in space.  This particular pod on the ship is breaking apart.  The man, Fox, is a blue.  Ruby knows they exist, but until now the only other color she's seen are the Reds, security forces which are junior league gestapo.

Her conversation with Fox makes her want more than a life of drudgery enough to challenge the status quo.  Although much of the ship's history has been deliberately hidden from the greys, Ruby knows she won't be the first to fight for freedom.  She hopes unlike some of her predecessors, she lives to enjoy that freedom.

Read more »
Posted by Adventuresfantastic at 9:03 PM No comments:

A Look at the First Issue of Waylines

I discovered a new online magazine today, Waylines.  It bills itself as a magazine of speculative fiction and film.  There was a promotional issue last month, which I missed.  I think the publication is bimonthly, but I never found anything that said explicitly what the publication schedule is.  I base the previous sentence on the fact that it does say edtior David Ress-Thomas will be writing a bimonthly editorial.

I want to take a look at the first issue.  This one contained an editorial, interviews with some of the writers, artists, and filmmakers, plus interviews with Cat Rambo and Christopher Barzak.

Rather than start with the fiction, like I usually do, let's examine the films.