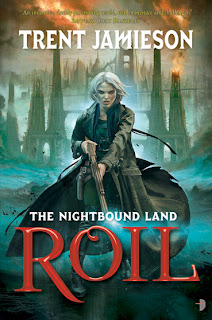 The publisher's website classifies this one as fantasy, but I'm going to pick nits and call it science fiction (which is why I'm reviewing it here rather than over on Adventures Fantastic), or as a compromise, science fantasy.  Unless I misread something, this one takes place on another planet thousands of years in the future, after at least one civilization's global collapse.  In other words, Roil is science fiction that reads like fantasy.

I've never read William Hope Hodgson's The Night Land, but from what I've read about it, I suspect there are similarities between that work and this one.  The subtitle of the book, or rather the title of the series, is The Nightbound Land, after all.   In addition, Roil has elements of steam punk with a dash of pulp adventure thrown in.  There are airships, but they're organic, living things.  There are examples of advanced technology in a milieu of Victorian era science.  There's a man who is at least one thousand years old.  There are strange races that are only partly human.  And a cast of Dickensian characters.  If any of these appeal to you, then you should check this book out.

Things aren't well when the book opens.  David has just seen his father murdered by political enemies.  One of the few remaining political allies, Cadell, is his only hope of survival.  But Cadell is the man who killed David's uncle.

Far to the south, deep within the Roil, Margaret is the only survivor of the city of Tate.  Now she has to make her way hundreds of miles north, out of the Roil.  Fortunately, if anyone can survive the roilbeasts, she can.  That's her on the cover.

For David, Cadell, and Margaret, things are going to get worse before they get better.  If they get better.  The Roil is a region of heat, inhabited by bizarre beasts, that has been spreading slowly northward for years.  And it's about to pick up the pace...

Things move fast.  The roilbeasts are really unique, especially the Witmoths.  Those were just plain creepy.  And the Vermatisaur was cool.  The image of one nesting in the tower in an abandoned city was one of the strongest in the novel.  I hope one shows up in the next book.  There's plenty of mystery about how things got the way they are, and Jamieson unveils things at a nice, steady rate, so that the reader is drawn into the story deeper and deeper the more he reads, just like being lured into a trap.  The characters grow and change, and their relationships don't remain static.  And there's no guarantee they will all survive, adding to the suspense.

This book was a little different from what I've been reading over the last few years.  It had a much more old fashioned feel to it, as though I were reading a Victorian or Edwardian novel.  That's a good thing, and for a number of reasons.  Not least of which was the fact there were several places Jamieson could have inserted a sex scene and didn't.  Coupled with the low amount of profanity, that makes this a novel that could be given to younger readers, building the author an audience that will probably outlive him.  While not exactly YA, it's got enough cool stuff in it that teens and preteens would enjoy it, as well as characters they could identify with.

Intelligent, well-read adults will enjoy it, too.  I normally put up a link to Amazon when I review a book, but that feature doesn't seem to be working at the moment.  Instead, I'll leave you with a sample chapter, courtesy of Angry Robot Books.


Posted by Adventuresfantastic at 8:30 PM