They Don't Write 'em Like That Anymore: Jack Vance's City of the Chasch 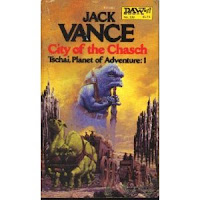 City of the Chasch
Tschai, Planet of Adventure:  1
Jack Vance
This is the first book in a tetralogy.  I picked it up along with books 3 and 4 when I was in high school, but couldn't find the second volume.  This was in the pre-intenet days.  I eventually did come across it, but never got around to reading it at the time.
I'm at a conference this week, and needed something to read on the plane when I had to keep the Nook turned off.  (Preparing for the conference is why I haven't posted anything here lately.)  I had only read this book in the series, and that was...a long time ago.  I couldn't remember a thing about it and decided to give it another try.
I loved it!  This is an old fashioned planet story, about an Earthman on a lost world trying to make his way home through all sorts of exotic alien races.  It's the sort of stuff that's in far too short supply these days.
The story goes like this.  Adam Reith is a scout on a ship from Earth that has been sent to investigate a distress signal that was sent over 200 years previously from the planet Tsachai, which until now was unknown humans.  Just as his scout ship is leaving to visit the planet's surface, a missile destroys it and damages his scout vessel.
He survives the crash with injuries, and is taken in as a slave by a tribe of humans.  It seems there are humans on this world, along with a number of mutant human races, and four aliens.  The Chasch, and there are three varieties of them, are lizard-like.  The Dirdir are tall and thin.  The Wankh aren't described much in this book, but they're the focus of the second volume.  Fourth are the Pnume, which are the ony native race.  They live underground and are feared by the other three races.  Each of the races has a subspecies of human that works as their slaves.  Each subrace of human has a different story of how humans came to the planet.

Shortly after he crashes, the Blue Chasch find and carry off his spaceship.  Since repairing it is his only chance of getting home, the book focuses on his quest to recover the ship.  Throughout the course of the book, Reith travels across the planet, picks up several companions, rescues a gorgeous woman, and fights a number of battles.
One of the things about this book is its use of classic sword-and-planet tropes, such as swords alongside advanced technologies.  What makes it rise above being a standard sword-and-planet tale is that it contains plenty of the Jack Vance wit and exoticism.  There's a scene where Reith and his companion Traz, formerly the chieftan of the tribe that found him, are watching a Dirdirman (human servant of the Dirdir) sleeping in an abandoned city.  The Dirdirman is being watched by a Phung, which is related to the Pnume.  The whole description of the Phung's behavior reads like a description of a mime.  It was hilarious.
This was an enjoyable book on many levels.  Not just the adventure, but the imagination Jack Vance displays.  I'll definitely be reading the rest of the series and reporting on it here.  This wasn't a long book.  The DAW edition, shown at the top of the page, is only 156 pages long.  If you like fre-wheeling adventure with a bit of wit and depth, and you haven't read these books, you should check them out.
Posted by Adventuresfantastic at 7:16 PM